A Blaéz and Darci Vignette. This is a scene from my ongoing series of vignettes
exploring the daily lives of my Guardians.
For those new to the series, this is Blaéz and Darci’s story.
Blaéz is a fallen god from the Celtic pantheon, now mated to a human, Darci, whom he
loves more than his own life…
This scene takes place soon after their story ends in Breaking Fate.
Here’s a peep into their lives after the HEA…

A slice of life short 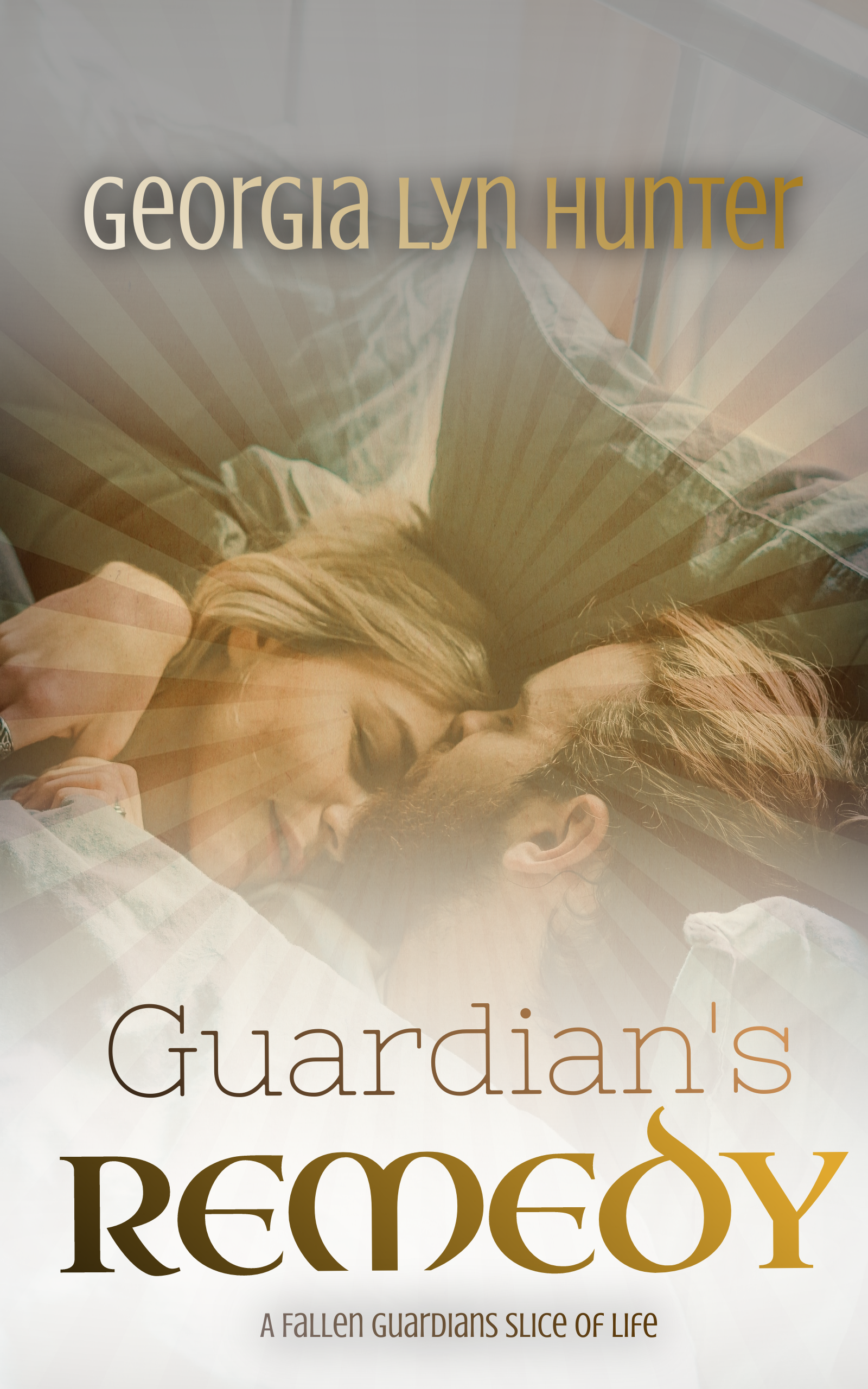 Darci paused at the entrance of the bathroom door, raking back her damp, honey-brown hair. Her breath caught as at the sight of her mate dressing—the man responsible for her current state of ragged breaths.

Tall, powerfully built, and with cropped ebony hair, Blaéz glanced at her as he pulled on a black t-shirt, covering that sexy body. Leathers encased strong, powerful thighs. But it was his eyes—now a beautiful cobalt blue—that held her attention.

It was still a shock to see them when they’d once been as pale as winter’s snow.

“I’m never going to make my meeting you walk around like that.”

At the soft, accusatory tone, She blinked. Then laughed. “I can’t exactly take a shower with clothes on…not that you were complaining a few minutes ago.”

“True.” A smile tugged that sinfully sensual mouth that could do magical things to her body.

Heck, he’d trapped her against the shower wall, teasing and stroking her, then he’d licked and nipped—hell, he’d just plain tormented her until she was a mindless mess of needs before he sank deep into her and let her come all over him. Yes, her man was ace in making her lose all control.

Blaéz sat on the chest and tugged on his boots, and with an utterly male look, his gaze drifted over her.

“A leannan, you in a towel, naked beneath it, is like a drug to me.”

“Aww, poor baby,” she teased him. “So don’t look at me, and just leave for your meeting.”

“Then I might as well stop breathing.” Blaéz rose to his feet and crossed to her. Cupping her face in his callused palms, he pressed his mouth to hers in a hard kiss. “I’ll see you later.”

Darci quickly slid her arms around his neck, stopping him. Dropped her voice to a whisper. “I’ll be here, waiting… Naked.”

He stilled. Eyes narrowed. He dropped his hands and grasped her by the upper arms. “Behave. I can’t go out there with a damn—fuck!” He nipped her lower lip with a sharp, punishing bite.

“Aww—that hurt!” She scowled and pulled back, licking the sore spot.

“And I have a damn hard on,” he muttered, yet his blue eyes glowed, gone all primal now. He kissed her once more, his tongue gliding over her abused lip. Then without another word, he stalked out of the dressing room to his meeting with the archangel and the other Guardians.

Grinning, Darci made her way to her closet, and then grimaced, a slight twinge squeezing her belly as she changed into pale blue pajama bottoms and a white tank top.

Ugh! Unable to relax, Darci tossed her book on the coffee table and pushed to her feet, and paced around the couch in the private study of their quarters a half hour later.

She rubbed her knotting stomach, the small ache from earlier gathering momentum. The spasm shooting through her belly still wouldn’t ease. No longer able to ignore it, she made her way to the bathroom.

God, she hated this time of the month.

She yanked opened the vanity cupboard and found a bottle of pain pills. Opened it. Darn, only one left. As she swallowed it with some water, she eyed the cabinet. She set the glass down and searched through it. Dammit! How on earth did she forget to buy more?

But then with everything that had happened in the past few weeks, meeting Blaéz and the upheaval that followed, her heart still stuttered remembering how badly it nearly ended for her and Blaéz, so no wonder she’d forgotten.

Stifling her groan and rubbing her stomach, she went back to the study, lowered to the couch, and picked up her cell from the coffee table. She texted Echo who was still in the Village, visiting her Gran.

Could you get me a box of tampons and a bottle of ibuprofen on your way back, please? The cramps are killing me.

She ended with a sad face emoji.

Blaéz was still downstairs in his meeting with Michael and the others. They would be heading out on patrol soon. But if he sensed she was in pain, he’d be here in a heartbeat and she didn’t want to distract him, not with the kind of job he had—killing supernatural evil. Dangerous and extremely deadly.

Keeping her mind-link to him shut, so he wouldn’t pick up on anything, she retrieved her book when her cell beeped with an instant return text. What’s wrong?

She stared blankly at the message. Blaéz? Oh. Shit!

Groaning at her faux pas, she typed again, except a shimmer took form, probably because she hadn’t responded fast enough for him.

Blaéz crossed to her. Concern realigning the sculptured lines of his handsome face, he crouched in front of her, his leathers creaking a little. His tee stretched across the muscular width of his shoulders and his thick biceps bulged, drawing her gaze to the mystical sword tattooed there. He rested his palms beside her hips on the couch.

Heat crowding her cheeks, Darci wrinkled her nose. “I’m sorry, that was meant for Echo.”

He reached out and smoothed the pain lines on her brow. “What is it, a leannan?”

She rubbed her flushed face. “It’s nothing really…it’s er”—how the heck did she explain this to him? —“that time of the month. I’ll be okay soon…”

He didn’t say anything for a moment, as if processing her words, then he removed her hand and laid his palm on her stomach. She could feel the slight warmth of his healing powers sweeping through her. His brow creased, his expression troubled. “I cannot heal this…”

“Don’t worry—” aww crap, she broke off, as another spasm speared through her tummy and straight to her back, “It’s normal,” she gasped, not doing a very good job of reassuring her extremely worried mate. When she could breathe again, she smiled. “I’m fine, really. It’s just something women go through, some suffer more than others.”

He was silent for several seconds, his gaze searching hers then he lifted her hand to his mouth and pressed a kiss on her knuckles. Pushing to his feet, he walked out.

Hmmm, Darci had no idea what to make of that. Sending her text message to Echo and making double sure it wasn’t any of the warriors, she lay down on the couch, curled into a ball, and closed her eyes, hoping the single pain pill would ease her horrible cramps.

At the sound of paper crackling, her eyes flickered open. Darci had no idea how much time had passed, only aware of the pain curling through her like a nagging toothache.

Her gaze lit on Blaéz. She blinked and sat up. Wide-eyed, she watched as he set a pharmacy packet on the table and another large paper bag near it. The hot water bottle wrapped in a towel, he left on the couch.

“What are you doing here?” she asked, bewildered.

In response, he crouched in front of her again, handed her a glass of apple juice, with another tablet. After she’d swallowed that with her drink, he rose and crossed to the television. Looking through the pile of her DVDs she had stacked on a shelf, he selected one, slipped the disc into the player, and came back to her. He sat down, picked her up, and settled her on his lap, his arms wrapped around her.

Darci eased back a little, stared at him in confusion. “You’re supposed to be on patrol.”

“You need me more. The others will call, if there’s an emergency.” He pressed his lips to her brow and gave her the hot water bottle. “I wrapped that up, it felt too hot. Here—” reaching out, he pulled out a box of Belgian truffles from the paper bag and set it next to her. “You like those.”

The man made her fall in love with him all over again.

“How do you know all this—what to do?”

“Google. I can’t stand to see you in pain,” he said quietly, brushing a curling strand away from her face. “I have what you need, in there.” He nodded to the pharmacy package.

No, he was all she needed. She hugged him tightly, then peered into the packet. Tampons.

Breathing deeply, she eased back into his arms and held the hot water bottle against her sore stomach. God, her man made her want to bawl. And in this emotional state, with her fluctuating hormones, it was guaranteed.

Blaéz took the remote from the table and switched on the digital player. The opening scene of Buffy came on…and there was Spike tailing Buffy through the cemetery.

Darci huffed out a laugh and looked back at Blaéz. She doubted he’d intentionally chosen that one. “You don’t like this show.”

Her heart tripped. Pressing a kiss to his jaw, she snuggled into his embrace and rested her head on his chest. She slid her arm around his waist. “I love you.”

He rubbed his cheek against her hair, his hand slid beneath her tank top, his thumb tracing small circles on her waist. “There are no words for what I feel for you, a leannan,” he whispered. “But I love you will have to suffice.”