This has been one of the toughest book to write. In the end, the story revealed was emotionally draining, and I realized why. As I opened up, so did he. Blaéz took a little bit of my soul in the process.  Blaéz, who lived in a void, until Darci. It’s been quite an arduous  journey for my emotionless hero to his HEA … 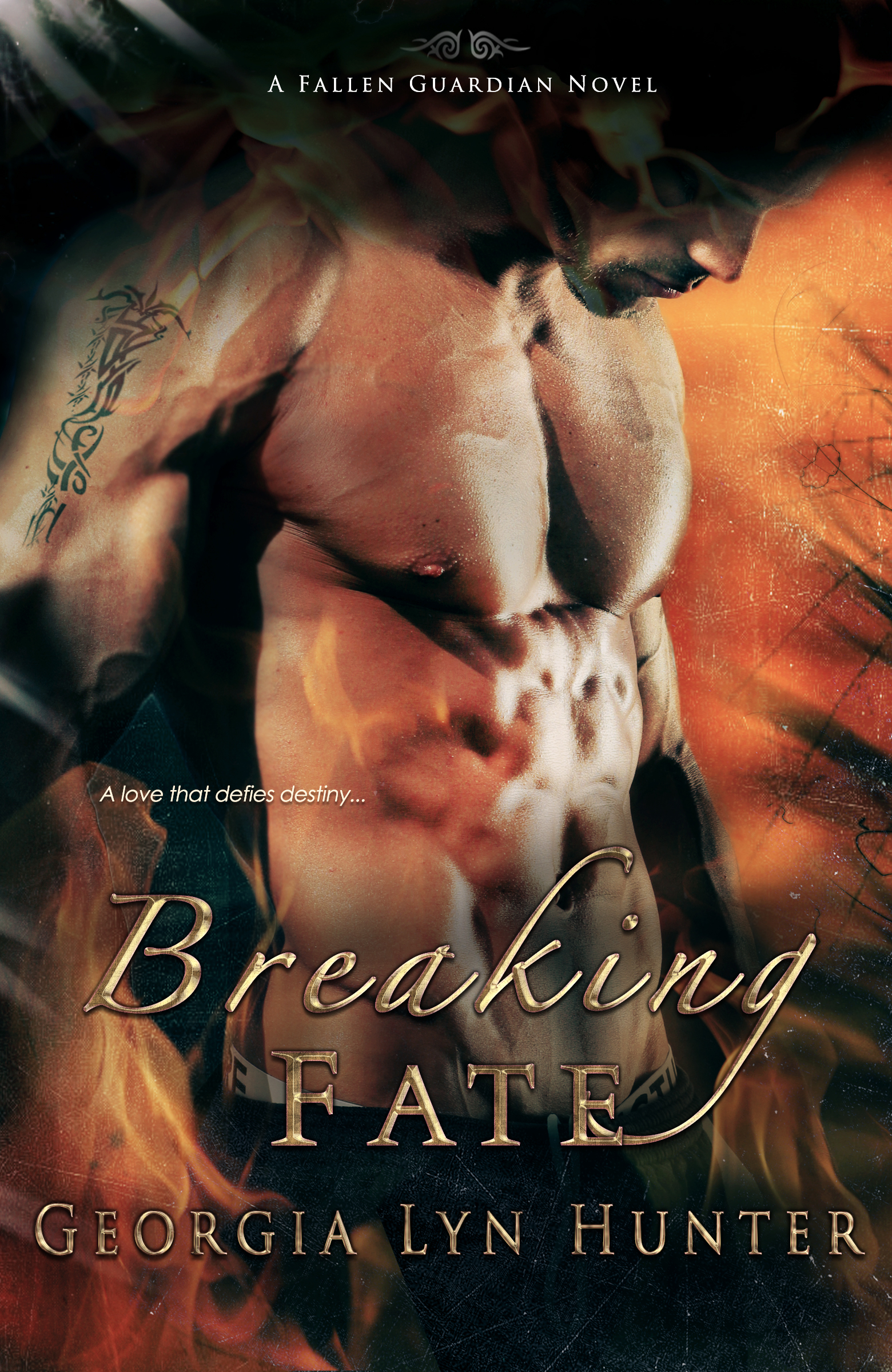 Darci Callahan has given up on love. But when a lethally handsome stranger suddenly appears late one night, she finds herself inexplicably drawn to the captivating man with the pale, empty eyes—a man who awakens in her a desire she never believed possible. Except Blaéz brings more than unexpected passion to her life, he brings danger.

“An enchanting world of danger and darkness, Hunter captivates with her sexy tale of fallen gods, demons, and forbidden love that conquers all.” ~LITERAL ADDICTION

“Hot, sensual and sexy! The author has done an amazing job, this book has it all, edge of my seat, nail-biting suspense, and a plot that grabbed my attention from the first page. Hunter has out done herself again. Fantastic series!!” SARA-Reviewer

“Scared?” Blaéz taunted. His body, his knuckles were bruised to the bone and yet he felt nothing. Remained detached from it all. “You must be. You’re fighting like a pansy—”

Týr’s granite fist crashed into Blaéz’s face, stopping the words. Stars exploded. A brutal kick followed and sent Blaéz slamming into one of the trees surrounding them in the forest clearing. His lungs flattened. Pain sang its way up his spine. But the sensation dissipated far too soon.

Pushing away from the tree, Blaéz swiped at the warm blood flowing from his brow. And smirked. Having lost his emotions while incarcerated in Tartarus, he excelled at emulating them. But it sure triggered Týr’s scowl.

“This mixed martial arts crap of yours is a pain in the ass! Why the hell can’t we use swords?”

“They don’t cut it for me.” Blaéz slowly circled him. “You want your Harley back? Win it. A thirty-minute no holds barred fight. Or I’ll sell the Easy Rider on eBay for fifty bucks.”

The warrior had lost the bike to him in a game of foosball a few weeks ago.

“You’re fucking insane, man.” Týr glared at him, fingers clenching and unclenching. “A screw short somewhere in that damn head of yours. The Harley cost a mil. Sell it. Whatever. I’m not kicking your ass.”

“What have we been doing for the last hour? Dancing?” Blaéz cocked a brow. “I guess my way’s too risky, could bruise that pretty face of yours. Maybe take up knitting, something safe—”

In a blur, Týr moved then stopped dead, yanking back his fist. He shoved back his damp, pale hair from a sweaty and pissed-off face. “I’m done with this shit. Find someone else to beat the crap outta you!”

He stormed off into the trees, his black Gi’s riding low on his hips.

Týr’s anger sliding off him, Blaéz turned away. The training session from the last hour had barely made an impact. He needed more than a short fight session to haul him on the straight, and see him through patrolling tonight.

I can give you what you want…

The sly voices slithered into his head, tugging at him. The strain on his psyche was growing stronger, the pull inexorable. He had nothing to ground him in this place, to keep the ominous call at bay. Save one.

He dematerialized to the northern parts of the Guardian’s island estate, just off Manhasset Bay, where the treacherous cliffs reigned and took form on the precarious edge. He cared little for his life. The only reason he still existed was because Michael saw something in him worth saving.

Far below, the sounds of the furious collision of waves against the rock face drenched the air.

With no way of shutting out the voices and trying to hang on to an oath taken several millennia ago, he dove off the precipice, hitting the jagged rocks just below the churning waterline.

He let the waves carry him back and toss his agonized body onto the rugged shore. And closed his eyes…

Family. The word seeped into his chaotic mind. She hadn’t stood him up…her family was important to her. His thoughts drifted to the copper-haired human who’d stood so protectively behind her. Blaéz’s fingers tightened on the steering wheel. “Who is he, the other male?”

Her brother, it appeared, favored the man for her.

Over his decaying corpse would Blaéz let that happen, and since he couldn’t die…yeah, never. But the sense of unease rolling through his gut just wouldn’t quit. Declan disliked him, it didn’t take a genius to figure that out. And Darci loved her brother. What if she did as he wanted and refused to see him any longer? That thought shot Blaéz’s already filthy mood into the gutter.

Moments later, he pulled up outside the brownstone. She opened the door and turned to him. “Are you coming in?”

Her gaze widened before narrowing. “Really? You brought me all this way just so I wouldn’t leave with Alex?” She shoved her hair off her face with an impatient hand, eyes citron in ire. “I don’t believe this. Blaéz, Alex is my brother’s gay friend. And, what? You plan to make me a prisoner in my own home? Let’s get one thing straight. I agreed to see you, not have you run my life.”

With that, she jumped out, banged the door behind her and ran up the stairs to her home as if she couldn’t get away from him fast enough. Blaéz didn’t think, just reacted. He slammed out of the SUV, sprinted up the steps after her, and grabbed her just as she opened the front door.

“Oomph! What the—” She scowled up at him. “What now? You want to physically lock me up, too?”

“Shut up, Darci.” He pushed them inside. With his foot, he shut the door and trapped her against the wooden panel, slapping his palms beside her head. “You do this to me,” he growled. “When I’m away from you I get by, then I see you, and my mind’s in chaos—I cannot think straight—”

At her anger, his faded. With his body pinning hers to the door, he lowered his head to hers and groaned, “You torment me.”

As if that would stop him from taking what he craved. “I’m sure I can change your mind…I only know what I need right now…” Slow and deliberate, he ran his tongue across her compressed mouth. She refused to let him in. Stubborn woman. “And what I want is your tongue in my mouth, and you wrapped around me.” He bit her lower lip.

A choppy breath escaped her. He struck and captured her mouth. With languorous strokes, he deepened the kiss, sucking on her tongue.

A moment passed and she shuddered. Her body relaxed. She melted against him and kissed him back. Blaéz explored her mouth, tasting, licking, and claiming it as his own. This was what he needed, to touch her, to feel her again. His hands lowered to her hips, he pulled her closer. The V of her thighs hit his painfully hard groin. Ah fuck, he grunted, pure need garroting him.

She freed her mouth from his, panted, “This is hardly an apology.”

“Then I guess I’m not doing a very good job.” He nipped her jaw. “However, I learn…fast.”

“I’m sure.” A smile tipped her mouth. “And I’m really, really glad I torment you.”

“Sadist,” he murmured, trailing his lips down her neck.