Heaven and Hell have never been so close… 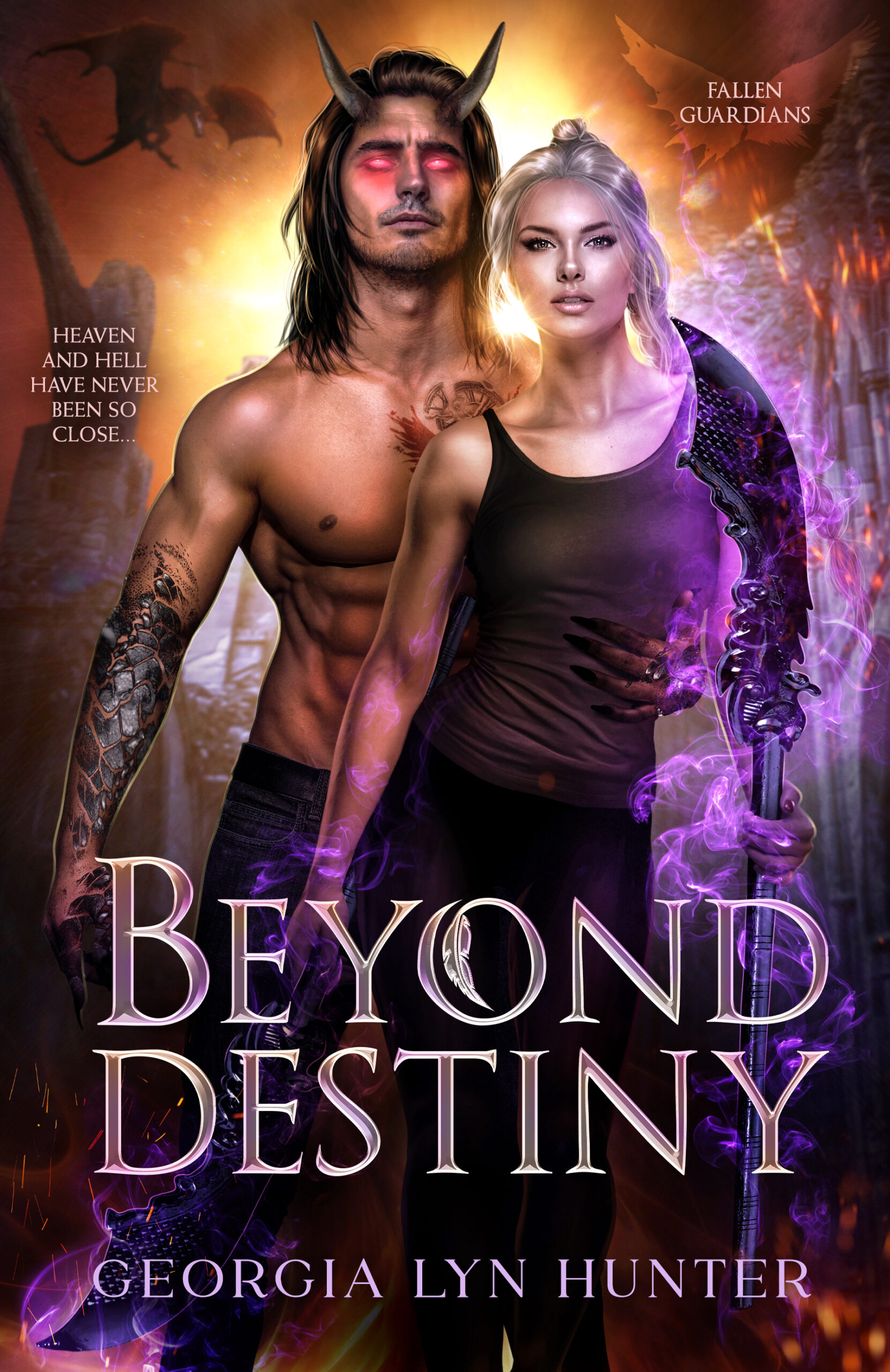 Cover art by Nico of thebookbrander.com

Can a creature of the dark and an angel conquer a forbidden love?

As a new Guardian, bloodshed and death become Ely’s way of life. During a skirmish, she faces off with a demon unlike any, whose sexy swagger and wicked smile throw her off her stride. Until he opens his mouth. Then she wants to kill the maddening male. Yet, every time he’s near, the draw to him is inexorable…but he’s her sworn enemy.

They call him Sicari, an assassin. Except he is something worse—a monster. Bound to a hellish existence, Nate shuns entanglements of any sort until her. A female who’s as lethal as the weapons she wields, and who cracks through his armor with just a glare. Their attraction is undeniable, but they can never be. Not when his all-consuming desire for his beautiful nemesis becomes as dangerous as his need for gore and death.

As emotions unravel, aware of the eternal heartbreak, both succumb to a dark passion, awakening Nate’s sinister nature. With enemies on all sides and time running out, Nate must sacrifice everything to protect the angel he loves. But Ely will battle the entire Dark Realm to save him, even if it means facing a fate from which there is no escape…

*Another slow-burn dance in this 126k+ words enemies-to-lovers story!

Editorial Review:
‘Fated Mates with a slew of inner baggage and enemies to battle, unexpected plot twists and surprises, and a cast of unique and amusing supporting characters. In short:  another fun, action-packed installment in the Fallen Guardians paranormal / fantasy series sure to please both new readers and current fans. ~C. Breslin

Get a copy here:

Or read on #kindleunlimited

The first meeting between H/h

Demons swarmed Ely from all sides. Her weapon braced, she moved in a blur, slicing and stabbing. Shrieks echoed. A punch landed on the side of her head, and she stumbled backward. Stars exploded, pain careening through her skull. Her senses swam. She was going to crucify the effen cretins!

Teeth clenched, fingers tightening on her staff, she eyed the asses, adrenaline spiking.

Another demon flashed in front of her, blocking her view, and more of the vermin backed him up. This one was reed thin and pretty. Pale curly hair hugged his skull, the color almost matching his milk-white cherubic features. He angled his head and smiled, then his nose twitched. “By the darkness, you smell…incredible. Come,” he crooned in a hypnotic hum, dark eyes flashing a deep red, his invasive stare sliding over her body as if licking her.

For that alone, she wanted to gouge out his eyeballs and make him eat them before killing him.

“Enough!” an icy voice snapped. The utterly lethal tone had Ely freezing for a split second.

A shadowy blur catapulted over the horde and landed in front of them, sending the remaining demons scattering, his hood falling off his head. Even the anemic cur took a step back as their leader stalked over like some predator of the night. His long coat flew open, revealing black jeans hugging muscled thighs.

Ely didn’t retreat, her weapon braced, fed up with the lot and their freaking arrogance.

If Milk-White was good-looking, this one knocked what little air she had in her lungs right into the stinky alley. Straight, ebony hair framed a face made for sin and fell about his broad shoulders. His flame-hued, topaz eyes did a quick up-down of her, and for some reason, it had her breath catching—

Up close, he was even more breathtaking. Tiny pairs of black hoop earrings glittered in both his lobes, and something about them added to the perilous air he wore like a second skin. Heck, she couldn’t help but stare.

Then he opened his mouth. “Female, any other time I’d play with you. Right now, do me a fav and get lost. This is none of your business.”

One thing she hated even more than having a mate chosen for her was being spoken down to as if she were a clueless idiot.

“Wrong,” she said coldly, her fascination dying. “My turf, my biz, demon.”

There was a heartbeat of a pause. Then his head cocked, recognition dawning in those hellish eyes. One corner of his mouth tipped in a knowing smirk, revealing the tip of a fang.

Too bad for him, only one of them would come out of this alive.