By Georgia Lyn on November 7, 2017 in Blog, Books, My Ramblings, Sssenual Scribbles
0
1
HAPPY RELEASE DAY !!
In a world of shadows, she fell for darkness…

BLURB
From the scorching pits of Tartarus, a warrior emerges with a deadly need for more than vengeance.
A loner, Dagan, lives with an inexorable thirst he’s kept hidden for eons, even from his fellow Guardians. Until he meets a beautiful, maddening human who awakens in him a hunger that shakes him to his very core, and threatens to shatter his tightly erected shields, exposing his dangerous secret. And wanting her is a path leading to destruction.
Driven to find her missing mother in a shadowy world, Shae Ion refuses to be sidetracked. When she becomes the target for a sinister force, a sinfully sexy and utterly impossible immortal abducts her, and he’ll stop at nothing to keep her safe.
Stuck in an isolated place with the reclusive Guardian who allows no one close, Shae struggles to control her burgeoning powers, and is unprepared for the tangled emotions he stirs in her. But passion has a way of obliterating barriers.
However, the road to happiness is strewn with treachery. Nothing is sacred or safe. When a ruthless old enemy resurfaces, and comes after Shae, they are drawn into a terrifying, supernatural battle. And not even Dagan, a lethal, immortal warrior who’d lay down his life for her, can save her now…
Compelling from start to finish, Ms. Hunter gives us another engaging tale of passion and courage, and reminds us that strength and understanding can sometimes be found in the most unlikely places.
– Michelle Leah Olson, Goodreads Reviewer

An Excerpt from the Book

Take an inside look at Guardian Unraveled. Read this sizzling excerpt from the book.
Shae inhaled deeply, counted to ten, and prayed a madman hadn’t abducted her.
He remained hunkered down in front of her, eyes cool, his powerful forearms braced on his muscular, leather-clad thighs. Small scars marred his tanned fingers he kept loosely clasped in front of him. He wore a wide, corded leather band on one thick wrist and several narrow ones on his other. His black t-shirt stretched across his broad shoulders like a second skin, the short sleeves revealing bulging biceps. On his left one, he sported a sword-like tattoo made up of a myriad of intricate designs. It was unusual, like nothing she’d ever seen.
With those clothes and his long, ropey hair, he dressed like an extra from a movie shoot or something.
“You can’t keep me here,” she tried to reason with him. “You have to let me go. My uncle will be frantic and calling the cops by now.”
“Not until you answer my questions. Those dead men?”
She scowled, all thoughts of being calm and rational flying out the window. He’d accosted her outside the club, kidnapped her, and now he expected her to answer his damn questions? “Just what the hell are you talking about? What dead men?”
Sure, he was infuriatingly good-looking, but then so was Ted Bundy.
At the thought of the serial killer who’d charmed and murdered several college girls, Shae sprang to her feet and bulleted for the door. He grabbed her around the waist. Crap, she’d forgotten how fast he could move.
“Lemme go!” She hit him, but he merely swept her into his arms like she was some delicate freakin’ daisy and carried her back. Furious, she bit him. Hard. And hoped her teeth did some real damage to his biceps.
An annoyed grunt escaped him. “Stop that, you little hellcat.”
Like a bag of unwanted grain, he dropped her on her butt, back on the mat again.
Pain jarred up her spine, and she clenched her teeth. But the three angry, red streaks scored on his powerful forearm had her blinking.
She’d done that? Shocked to her core at her dreadful behavior, Shae opened her mouth to apologize but when she met those burning yellow eyes that had taken on hints of orange, a spurt of anger cut through her guilt. “This is kidnapping. I’m gonna have your barbaric ass thrown in jail!”
“Try. When you’re ready to talk, scream. Maybe I’ll hear you, maybe I won’t.” His eyes like flint, he stalked out, shutting the door quietly behind him, only to stride back inside. He crossed to the far end of the room, grabbed all the swords from the stand there, and walked out again. Leaving behind a small fridge. Right then, she wanted to fling the appliance at his arrogant head. Except he looked like he could break her neck with just one hand.
She had to get out of here before he came back.

Other Books by Georgia Lyn Hunter

Don’t miss the other books in the Fallen Guardians series!
In the shadows of the night, they trawl the streets, keeping supernatural evil at bay. It’s a pledge they must uphold to live in this world. But with darkness in their souls and hell in their eyes, solitude’s their only companion, or so they thought. Until their gifted daggers showed them another path. Hard, treacherous, and strewn with wonder…

The storyline is solid, tense, and well thought out. I was pulled in immediately, before I finished the first page, and the book held my interest all the way through, without letting up a single time. Absolute Surrender is a good, solid story, the kind you can sink your teeth into–one you’ll want to keep on your shelf and come back to visit again and again.
– Regan, reviewer

Praise for Echo, Mine

Hunter captivates with another strong and sexy heroine and the delicious alpha immortal who loves her. The perfect balance of action, conflict, and romance, and proof that sense of self is just as important as true and everlasting love.
– Literal Addiction

If you love paranormal romances with characters that heat up the page, you don’t want to miss this book and all its surprises.
– LiaL, The Romance Reviews

I’ve been creating stories from the moment I could string two words together. No matter the tale, it always has romance woven through them. Yes, I’m a hopeless romantic.
When I’m not writing or plotting new books, I like to read, travel, paint, or troll flea markets where I usually buy things I might never actually use because they’re so pretty.
After working in a few jobs all art related, a chosen career as a fashion designer, then an art teacher, I finally found my passion nearly 7 years ago: writing. There really is no other job I’d rather do.
Official website: http://georgialynhunter.com/
Connect with Georgia Lyn Hunter on social media: Facebook | Twitter | Pinterest | Instagram | Goodreads Author Page
In partnership with 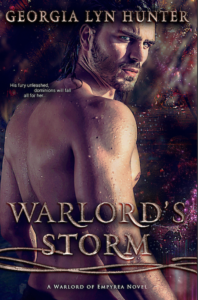