If you signed up for my newsletter, then you would have read the sizzling excerpt I’d included in it. For those who haven’t, I can’t really post the same one here, but here’s another.

When a bad boy falls… 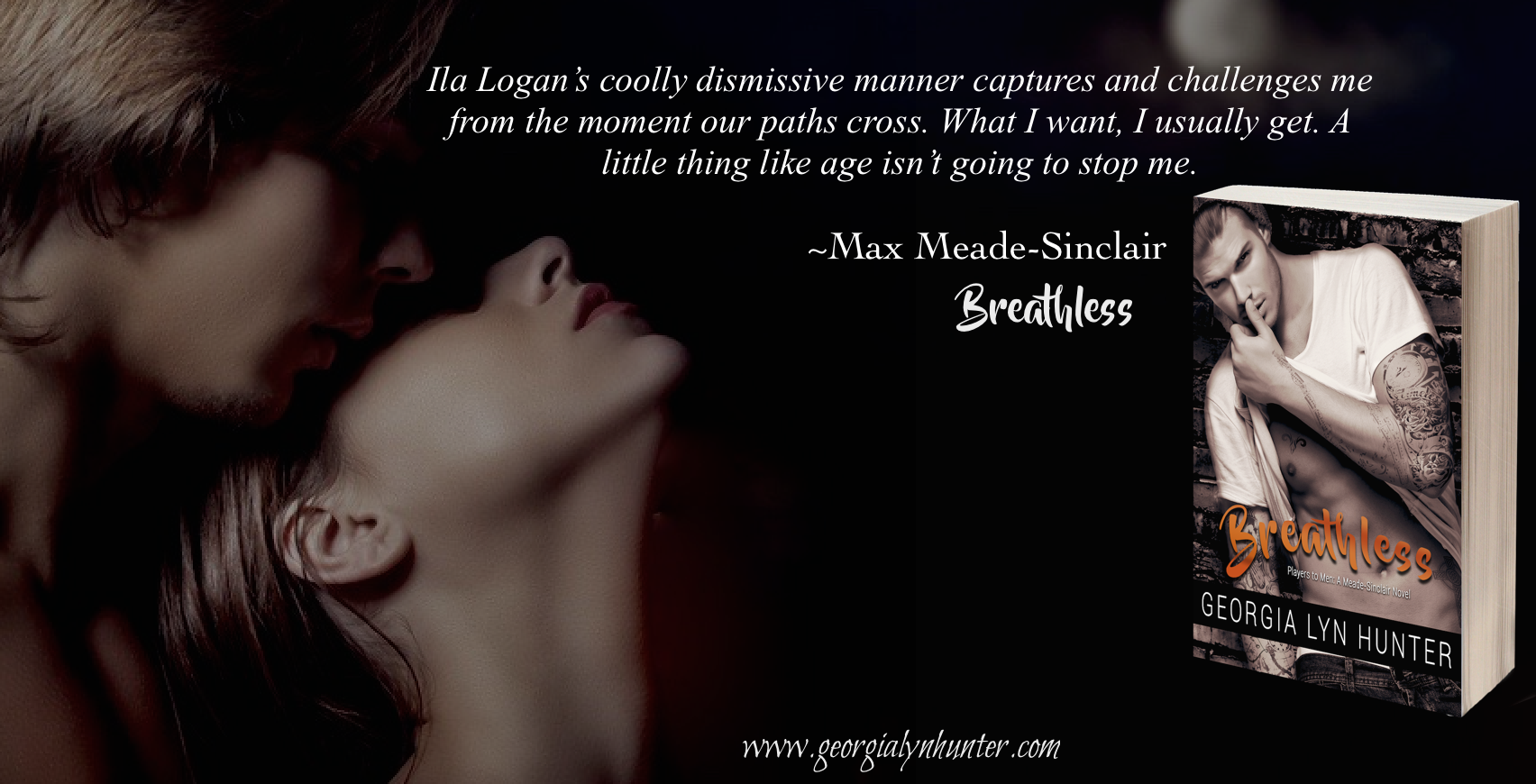 When the fairy tale life you believed in falls apart, there is nothing else left…

Or so I thought, until Trouble, wrapped in one hunky body and a sinful smile promising untold pleasure of the carnal kind, lands on my doorstep. Despite what my body demands or the fact that I’m irresistibly drawn to him, I’d been burned too deeply to dare try again. Besides, Max Meade-Sinclair is my younger sister’s best friend—and totally off-limits.

Ila Logan’s coolly dismissive manner captures and challenges me from the moment our paths cross. What I want, I usually get. A little thing like age isn’t going to stop me. Neither are the men who disappear into her secluded room. However, she proves a difficult opponent who leaves me falling for her a little more at each encounter.

This tempestuous woman is mine, but to win her, I must dig deeper, and show her that beneath my brawling, player facade exists a man who would go to the ends of the earth to make her happy.

Footsteps sounded. I didn’t want company and hoped whomever it was would just fuck off. I took another drag, filling my lungs with more smoke.

At her voice, everything in me tensed. I glanced at her. “What do you want?”

She drew closer. “Are you all right?”

A harsh laugh caught in my throat. All right? God, I was so fucked in the head over this woman, I had no idea which way was up or down. It surprised me that she’d come after me.

Deliberately, I let my gaze sweep over her as I took a longer pull on my cigarette, wanting some reaction out of her instead of this frigid wall she presented me with daily.

Her face flushed, and she crossed her arms beneath her chest, dragging my gaze to her tempting breasts. Her short, unpainted, ragged nails dug into the flesh of her upper arms, but her fingers were messed with the tan and cream oils she’d used painting the fucker.

“Why are you here? Don’t you have a client to see to?”

A sigh escaped her. “Max, this isn’t working. Kate, my boss, has a place available. It’s not very expensive—”

“Of course,” I drawled and took another pull from my smoke. “Easier to get rid of me than face the truth, isn’t it, Ila? Be honest with yourself for once. You want me, too, and you’re too fucking scared to admit it.”

Her gaze shifted away from mine and then came back—a hint of desperation in her gaze. “I’m not scared.”

“Really?” Anger edged my cold tone. “Then why so anxious to get rid of me? Running, Ila?”

“I’m not running—don’t you want a decent bed to sleep on instead of a couch? And stop calling me that!”

She didn’t like me calling her Ila? Satisfaction welled. I’d rattled her. “It’s your name, isn’t it?”

“Not the way you say it.” Her mouth tightened. “Besides, you can’t be comfortable there.”

“It’s odd. My sleeping arrangements never came up until I wanted to rearrange your client’s face. And just how do I say your name, Logan?” I lowered my tone to a sensual purr. “I don’t care where I sleep so long as it’s near you.”

The mouth I was dying to taste again opened then closed. I’d never hidden the fact that I wanted her.

I took another pull on my smoke. “Why?”

What? I was too young to even consider the type of relationship she’d probably want?

Grasping her hand, I pressed it against my chest. “Whatever is happening inside here tells me differently. When I think of him naked around you, I want to kill him.”

Her lips trembled. She eased her hand from under mine. “Max, don’t make this any harder than it is—”

Her eyes widened. Bet she hadn’t meant to let that slip.

Hell, I could be a nice guy and let it go. I could even take up the offer of whatever poky box of an apartment she’d so sweetly offered. But I wasn’t nice. I always walked where I shouldn’t. And when it came to this gorgeous and insecure girl who thought she was too old for me, I had no qualms about not being fucking nice.

“So you think it’s wrong, me wanting you?”

The fact that she said it without hesitation twisted my stomach.

“And I have a date. Tomorrow,” she added.

Irritation surged through me. No more, I was done playing.

“I see.” I eyed her for a second. “Okay, then. One kiss. Can’t hurt, right, with you dating someone else?” I killed the end bit of my smoke on a nearby wrought iron table and tossed it away. “And I want it all, Logan, since it’s probably the only thing I’ll get from you.” Sliding my hands into my pockets, I rocked on my heels and waited.

“You’re crazy!” She spun and headed back for the stairs.

“Scared?” My soft word floated in the night. Accusing.

She stopped dead. A low growl escaping her, she pivoted and stomped back to me. Grabbing my tee, she yanked me down to her and slammed her mouth on mine.

It wasn’t the kiss I wanted, but it pierced me all the way to my hardened heart.

Before she pulled away, I slid my arms around her waist. “Not so fast. That’s not the kiss I want—this is.”