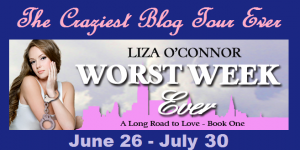 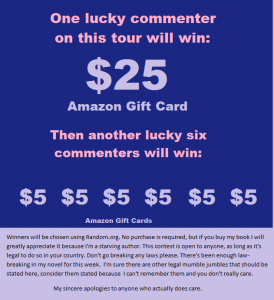 Liza O’Connor is a firm believer in rehabilitation. When this Darling was fired from the Worst Week Ever, instead of being killed, it went to work in the marketing department. It has now been rehabilitated into Interesting Blog Content to promote Worst Week Ever.

We begin reading as Carrie relives her first day of work with Trent and her new friends Tall and Tiny:

“I’m stuck in the basement, stressing out HR would write me off as a no show. However, the guy insists I wait in the chair. Finally, I noticed my boss’s name and phone number on a sheet of paper taped to the wall, so I called him.”

She glanced over at Trent. “To say he did not receive my call in a pleasant manner would be an understatement. His screaming made Jack jump two inches off his seat. When Trent finally stopped what I would later call ‘channeling his father’ I explained what happened. He declared it the stupidest excuse he’d ever heard and if I didn’t get to my desk in one minute I no longer had a job.”

Both men glared at him.

Trent held his hands up in surrender. “My new hire tells me she’s in systems and can’t leave. I couldn’t make any sense out of her excuse.”

They both nodded in unison and turned their attention back to Carrie.

“Determined to keep my job, I ignored Jack’s demand to sit down. Instead, I flew up to the fifth floor and threw myself on the chair behind my desk.” She grimaced. “Only, the chair had a broken leg.”

Trent chuckled. “So I storm out of my office, pissed I can’t get one single decent employee and see this mound of paper on the floor. First, I think the girl has come, trashed her office and left in record time. But then, I see a leg poking out beneath the mountain of paper. I watch her dig her way out of an avalanche of ‘yet to be filed’ papers that had languished on top of the file cabinets for the last two years. Worse yet, she had somehow managed to break a brand new chair.

“Why didn’t you fire her?” Tall asked.

“Because she sincerely apologized, which I thought a huge step above everyone else who worked for me. They would have demanded disability for some imagined injury.”

Carrie instantly came to his defense. “He does have an exorbitant number of ex-employees on disability.”

“So what happened then?”

“I gave her one of the chairs from my office.”

Carrie rolled her eyes. “A low, square chair that didn’t roll. My head barely peered over the desktop. So I returned to the broken chair. It had two of its three legs. As long as I leaned to the right, it would remain underneath me.”

She covered her face at the memory. “Trent suggested—more like demanded—I file the foot deep stack of paper now lying on the floor.” She sighed heavily. “Sounded simple, but thus began my first lesson: ‘Simple’ doesn’t exist at Lancaster Chairs. First, most of the papers in the files had fallen out during the avalanche, so I needed to get them back to the right folder, but I couldn’t find anything on the documents to tell me which paper belonged to which file. Next, I could not find a key to the locked cabinets. I searched my desk and Trent denied having one either.”

She stared at him woefully.

He spoke in his own defense. “I only had one key left. I didn’t want lose it like the twenty before it.”

Tall tilted his head. “How’d you expect her to file the stuff then?”

“I intended to make a copy of the key and give her one.” Her woeful look continued. “Which I subsequently forgot to do.” He flinched as he recalled his tirade a week later when all the files neatly sat upon the cabinets again. “But this got resolved weeks later. Right now we are on her first day.” He looked at Carrie, mentally wishing her to return to her first day.

“I let Trent know I planned to go to the supply room and asked if he needed anything. He yells at me to stay at my desk and pick up the files.”

“The previous EA would disappear half a day into the supply room,” he grumbled.

Carrie wrinkled her nose. “I think she went out for a movie. I found over a hundred ticket stubs in the desk drawer. I can assure you she didn’t stay half the day in your two foot wide, one foot deep supply-less closet.”

“Are you kidding? For what I spend in supplies? Somewhere, a giant storeroom exists.”

“I thought the same for many months, but having searched every single room by following the cleaning lady around at night, I assure you no such room exists.”

“Then where do the supplies go?”

“The good news is, we’ve reduced your supply cost dramatically by having people go online and request their supplies. If they exceed practical limits, then they receive a formal looking document to complete, which no one does, so those orders don’t go through. For those who order reasonable amounts, their items arrive the next day, and in cases of emergency, they can always ask me to share my supplies. No one has done that either.”

She sighed. “We may want to re-evaluate this system once we have good employees, but right now, everyone works so slowly, waiting a day for a pencil doesn’t seem to slow anyone down.”

Tall and Tiny’s brows furrowed in doubt and they looked his way to see his reaction.

Trent shrugged, finding Carrie’s assumption most logical. “If they worked slower, they would petrify into stone.” His focus returned to Carrie. “So where did my supplies go?”

“Home for their kid’s school projects, and I believe, but cannot prove, to flea markets for resale.”

Trent took a deep drink of his wine, trying to force back the anger building inside. He now regretted having begun this conversation.

She gripped his left hand. “I handled the matter. No flea market has your supplies for sale now.”

He breathed out and his anger faded at the touch of her hand. “See why I can’t let anyone steal her. I’d die of a heart attack within a day.”

And thus ends my second edition of  Rehabilitated Darlings.

I hope you enjoyed it so much you are astounded it didn’t make the book and can’t wait to read the great stuff that did make it in my book.

And for those who didn’t enjoy it, well, whatever you didn’t like is why it didn’t make the cut. 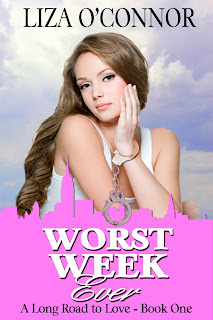 What do you get when you put a hardworking, can-do middle-class young woman together with a egoistical, outrageous, billionaire boss, then throw in the worst week of disasters imaginable?

Book 1 of the 3 book series A Long Road to Love.

Trent Lancaster spends one month without his Executive Assistant, or as his drivers refers to Carrie: ‘Trent’s brain, left hand, and right hand’. He’s had a miserable month without her at his side and to ensure it never happens again, he intends to marry his brilliant beauty. Only given all the times he’s threatened to fire her, he’s not sure she even likes him. However, the future of his company and his happiness depend upon him succeeding, so Trent begins a slow one week seduction that happens to coincide with Carrie’s Worst Week Ever when everything that can go wrong does so in hilarious form.

(Hilarious to the reader–Carrie is not having much fun this week.)

The door burst open and Trent strode in, followed by a man dressed in a black suit, carrying a tray of food. “Good, you’re finally awake. Saves me from having to throw cold water on you.”

Trent sat on her bed as he pointed to the desk. “Put her breakfast there.”

“On the one of a kind, heirloom desk, which has been in your family since 1845?” his butler asked.

“No!” Carrie yelled over him. “Let’s put it on the bed stand.” She pushed the Tiffany lamp further back to make room.

“Thank you, miss,” the butler said as he placed the silver tray on the stand and then stepped back. “Will there be anything else?”

“No,” her grumpy boss snapped. The moment the butler stepped into the hall, Trent slammed the door closed and glared at Carrie. “Do not countermand my orders to the staff. They’re impossible enough already.”

She chuckled. “I’m sure they say the same about you.” The tantalizing aroma of her food caught her attention. Unable to resist, she peeked beneath the silver lid.

Trent sat a foot away from her on the bed and sniffed at her plate. “I told the cook she’d be fired if you didn’t eat it.”

“If you actually said that, you should go downstairs and apologize. You appear to have a wonderful cook and should value her.”

He shrugged. “She’s okay. Not as good as the last one though.”

Unwrapping her fork from a swaddling of fine linen, Carrie dug into the egg-white omelet. Her eyes rolled in ecstasy. “God, this is fabulous!”

“Really?” He moved closer and stole her fork so he could try some.

She expected him to smile at first taste. Instead, he became annoyed. “Come on! Your taste buds can’t be that jaded.”

His eyes narrowed. “It’s very good. Far better than the crap she feeds me.”

Carrie shook her head and swiped the fork. If the cook prepared Trent mediocre meals, she understood why. During her first six months at Lancaster Chairs, Trent had threatened her with unemployment on a daily basis and she’d hated it. She nearly grew to hate him, would have, except his remarks always lacked sincerity, as if he’d learned them rote.

Once she’d consumed a quarter of the omelet, she offered him the fork. He smiled and shook his head. “You finish it. The cook will serve me my gruel later. Probably spit in it for good measure.”

Liza lives in Denville, NJ with her dog Jess. They hike in fabulous woods every day, rain or shine, sleet or snow. Having an adventurous nature, she learned to fly small cessnas in NJ, hang-glide in New Zealand, kayak in Pennsylvania, ski in New York, scuba dive with great white sharks in Australia, dig up dinosaur bones in Montana, sky dive in Indiana, and raft a class four river in Tasmania. She’s an avid gardener, amateur photographer, and dabbler in watercolors and graphic arts. Yet through her entire life, her first love has and always will be writing novels. She loves to create interesting characters, set them loose, and scribe what happens.

Don’t forget to leave a comment and provide your email address to win one of the tour prizes.

Want to increase your chances of winning a prize?

through all its stops.

The next big thing blog hop: Riley
Radio blogging: AS and me.