A Perfect Match ~ A new release by Valerie Ullmer 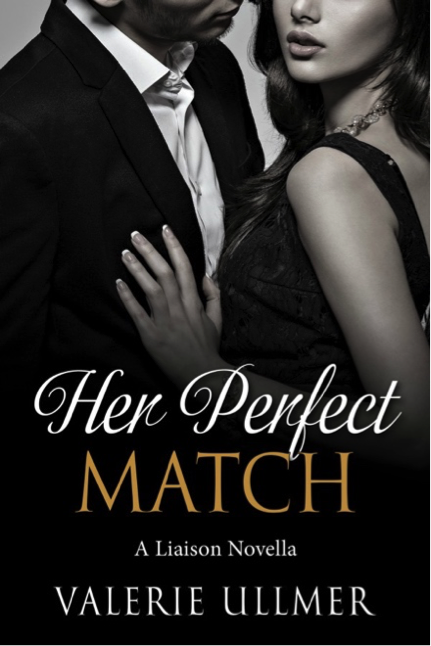 Gabriel Kane lived by one hard and fast rule.

But the moment Rebecca Cole walked back into his life with only business on her mind, he finds himself forgetting about the rules. Now, he’s determined to go after what he’s always wanted.

The force of her attraction to Gabriel had been immediate and unwavering from the moment he walked into her life. Because of her feelings and knowing that Gabriel wasn’t the type of man to settle for one woman, she kept her distance from the gorgeous and sexy man over the years. But now business had drawn them back together, and she can’t help but wonder if she could work with him and still keep her heart intact.

Gabriel Kane leaned against the massive oak desk with his arms crossed in front of his chest, schooling his face, and kept his true reaction to the request he’d heard from breaking through.

Over the last fifteen minutes, Rebecca Cole had laid out her business plan for the addition to her dating service, Liaison, in a precise and detailed way. But instead of the typical investment opportunity he thought he would hear, her proposal stunned him into silence. Instead of asking the numerous questions that swirled in his brain, he waited for her to continue.

He watched closely as her eyes wandered to the view behind him, out onto the high-rises of New York City from the floor-to-ceiling windows that surrounded his opulent office on the seventy-second floor in Midtown Manhattan. He had chosen the building for the intimidation factor. Most people were afraid of heights and some of his clients made a conscious effort to avoid the windows. It gave him an advantage even before they uttered a single word. His decorator had completed the rest of the office in solid woods with sharp angles.

He thought his office would have the same effect on Rebecca. But apparently the view gave her the strength she needed, and after taking a deep breath, she continued calmly with her pitch.

“The city is inundated with several hundred dating services, including exclusive online businesses, and if I expand into the male escort business on top of my dating service, I will be able to cater to many different clients at once.”

He chose her moment of strength to give up the pretense of keeping his eyes off her. He took his time as he perused the flattering wrap dress in the color of deep moss that emphasized the curves he had craved for years to touch, and became captivated as the color of the dress brought out the emerald in her eyes, which were fixed on him.

She was an understated beauty. Her hair was a lovely mix of dark amber and natural blonde highlights. Her body was classic, with her curves in all the right places and a tapered waist that drew his eyes as she leaned back in the chair in front of his desk, sending up a fragrance that tightened his body with desire he was unprepared for.

The side of her mouth tilted a fraction, as if she knew that he liked what he saw, and the gesture sent heat washing over him.

Practiced in the art of flirting, he gave no outward signs of his curiosity toward the woman he’d known since she was eighteen. But he had learned early in his life to hide his emotions from everyone around him, including those closest to him.

His parents had strict views on life; never show your hand and always go after what you want, even if it meant some had to be hurt because they weren’t ambitious enough. Because of his parent’s philosophy, he found himself alone and secluded, albeit successful.

That was, until he’d met Lucian Cole, Rebecca’s older brother. Their friendship was immediate, and with it came acceptance into a family that was so foreign to him, the first several visits made him uncomfortable. The level of affection that his family showed to him, and the easy grace in which he was accepted, left him longing. Well, accepted by everyone except Rebecca.

They’d met in the middle of the night as she snuck back in after being out with friends, and when she opened the kitchen door at four in the morning, she had run straight into him.

Pacing from one corner of the room to the other, unable to sleep in the quiet house and too preoccupied with his thoughts, he didn’t hear anyone until he felt her pressed against him. Before the automatic apology left his mouth, the smell of lavender drifted over him and her beautiful face tinted with the barest hint of a blush.

The impact rendered him mute.

His hands tightened where he had grasped her upper arms as he tried to get control of his riotous emotions, but she recovered before he had a chance to formulate a sentence. The flush on her face deepened, and before he could manage a word, she stepped back, out of his arms, and ran up the stairs to her room.

She lives in Denver, Colorado near the magnificent Rocky Mountains with her husband, the love of her life, and their sassy black lab, Maddie.  She started writing seriously in 2010 after an opportunity led her to become a full-time writer, and although it has taken her awhile, she’s finally realizing her life-long dream of becoming a romance author with four books scheduled to release this year.

As a voracious reader, she’s believes that all writers are rock stars, and she hopes that her stories are enjoyed as much as she loves the romance novels she’s devoured over the years, as well as those to come!